My Trans Mongolia Express journey starts from Sint-petersburg onward Russia towards beautiful Moscow. At half past six I arrived in Moscow by train and in 7 days I leave again, so I want to see as much as possible in this short time!

Also read: The raw beauty of the Trans Siberian Express

I am a big fan of the free walking tours around the world. The tours are free, but you can leave a tip for the guide afterwards. It is mainly students and locals who just enjoy showing the tourists their city in their spare time. The free walking tour in Moscow starts at the Kremlin. The tour guides tell you about the history of Russia, Moscow and the buildings you pass, but also give tips about nice restaurants and beautiful sights.

Hop on hop off bus

I love the hop-on hop-off bus! It will take you through all the highlights of Moscow and you can hop on and off whenever and wherever you want. I bought a ticket for 48 hours, it costs 36 euros. Tickets are also available in Moscow for 72 hours. There are 3 routes, all of which you can take to see the most of Moscow!

The metro in Moscow is very easy to use once you get the hang of it. Fortunately, it is not that difficult, because almost 7 and a half million people are transported daily by metro in Moscow. There is an app that shows you the fastest way from one metro station to another.

The Moscow metro system is one of the most beautiful and special in the world.

For a euro or 2 you can make unlimited transfers as long as you stay underground and take a look at the most beautiful metro stations in Moscow. One of the metro stations really resembles a ballroom with beautiful pillars, beautiful mosaics and chandeliers. There is also an art deco station, a station with life-size bronze statues, one with beautiful stained glass panels, one that resembles a palace, you name it! Well worth checking out the Moscow metro system.

Red Square is the main square of Moscow. This square was created after a major fire. Many historical events have taken place here and for a while the square was used as a market square. The Red Square is home to the Kremlin, Saint Basil's Cathedral, the GOM department store and Lenin's Mausoleum.

The Kremlin is a UNESCO World Heritage Site. It has many attractions such as a theater, museum, cathedrals and palaces. The Tsar used to live in the Kremlin. Now it is the place where the Russian parliament meets and makes decisions.

There are different tickets available for different parts of the Kremlin.

Wow, this has to be one of the most beautiful buildings in Moscow, in my opinion. Located in Red Square, the cathedral was built between 1555 and 1560. It is now a UNESCO World Heritage Site. What is so beautiful on the outside, is so unbelievably disappointing on the inside! I expected much more. What was very nice during my visit to the cathedral was that a male choir was singing inside, which gave a very nice effect.

A ticket costs about 7,50 per person.

This shopping center consists of 2 floors, in four streets and has 150 stores. Previously this was a commercial building, but became a state store in 1952. It's nice to take a look inside, but bring enough money because they mainly sell expensive brands here.

If you're in Moscow with kids, this is the place to check out! It is one of the largest department stores for children, with a cinema, multimedia amusement park, interactive science museum and even the Museum of Childhood.

Even without children you can enjoy yourself here. Especially with the view from the top floor over Moscow, the Kremlin and the Red Square.

Lenin's Mausoleum is in Red Square. Lenin's embalmed body has been in the Mausoleum for nearly 100 years. It is always very busy here and opening times are limited. I queued here for XNUMX minutes before the gates closed in front of me, so be warned and get there in time!

When you enter, go down a flight of stairs to enter the memorial hall. Then you walk past the sarcophagus and you can go outside again.

Cathedral of Christ the Savior

The Cathedral of Christ the Savior is a beautiful cathedral with glittering gold leaf domes and marble walls. The church was completed in the year 2000 and is still quite new compared to the other buildings in Moscow.

Inside, the Cathedral of Christ the Savior is very beautiful. You are not allowed to take pictures here unfortunately. There is also a museum about the history of the building and church history in general.

Moniek, 32 years old and I love to travel! I still have so much on my bucket list, Barcelona, ​​Indonesia, Peru, USA, Iceland, you name it! Hopefully one day we can tick everything off.

Spain | Beautiful places in the north of the Costa Brava

The Costa Brava is a coastal strip in Spain of 200 km long. This starts at the French border and continues to Blanes. In this blog I take you to the most beautiful places of the Costa Brava north. L'Estartit is a beautiful...

Do you want a nice roadtrip through the Balkans, but you don't know where exactly to go? No worries! We have visited the best places in the Balkans for you. This Balkan roadtrip is a 4600 ride...

Good food at L'Estartit | Affordable restaurants on the Costa Brava

L'Estartit is a beautiful and lively seaside resort on Spain's Costa Brava. Around the center and along the boulevard you can eat out for an affordable price. In this blog I give you the best tips... 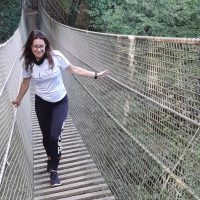