Home » Europe » The Netherlands » Living on a boat | First swim, then poop

Pooping, shitting, meuren, poop, bolts, mustaches, bears, pressing, a big message
make an exculpatory statement or simply do your business. There is such a
huge taboo on pooping. But why actually? We all shit. maybe in
varied shapes and sizes, but we all really have to do it a few times a
week to that mini office. And nobody poops florets or orchids, right? Living on
a small boat, together with friend and dog, is very helpful in breaking this taboo, but
it is difficult. I shouldn't want to take a real example from our dog, but if
I see how easy such a beast is in there… enviable. Bolts, a stubborn thing.
Sometimes literally.

As a child I went to the doctor once. A bit of a posh man, jacket, high tide,
pulled up socks and those shiny shoes. Whether he also had such brightly colored glasses, dare
I can't say for sure, but that was undoubtedly the case. My stomach had been bothering me for a while. Very bloated, some cramping and I felt fat, which is still common.

"Have you done a lot already?" the hot potato asked me while he touched my belly
felt. My mother was sitting on the chair next to the exam table. I looked at her questioningly.
She said nothing. "Hmm?" I asked. I cleared my throat. 'Have you already done shit', my mother translated. That was the language we spoke at home.

I smile. My dog ​​looks at me defiantly and I know that when I take a quick
make movement, he starts running back and forth with his tail between his legs growling
to play.

We lie on a gully where we come more often. A beautiful and peaceful place. During this holiday period it is busier and you see all kinds of boat people. From crates of beer and rubbish everywhere, to heavily polished yachts with spiral staircases.

We've been on the road for about four months now. What we have all not seen and experienced, is indescribable. Certainly not the feeling of freedom when I cycle to work in the morning or when I'm on the edge at sunset. Some dew over the water, sun shining. Awesome.

I throw a stick forward and my dog ​​runs after it like a madman. then he is
distracted. Something that shows that the dog is really more and more on the owner
is going to seem. Forgetting the stick, he dives into the tall grass. He sees something. No idea which animal
now again.

We have a pump toilet on board. You push the lever forward, pump water into the
pot, get rid of this and that and after flipping the lever again, shoot the
brown Johannes overboard.

In addition to learning that you should go for a swim before you poop, you are also becoming more and more adept at not making it too embarrassing in front of your partner. Think: put on some music, wait for the dog to go out or just keep pumping vigorously, hoping the toilet paper doesn't shoot overboard like a confetti cannon.

'Come!' I call. I see his little white head rise above the grass and he runs jumping
to me. We pass a group of people who have installed themselves for their
boat. 'Come on', I call, in the hope that he doesn't… and yes, sir sits down.

Of course I have poop bags with me, but why does such an animal always have to poop in places where it is seen? He's released, but I'm growling with my tail between my legs with a half-lukewarm sandwich bag in my claws.

The freedom such a beast has in it is enviable. On board you learn to give a shit about things, including bolts. Maybe that will develop even more. Would be nice. But for now it's good... 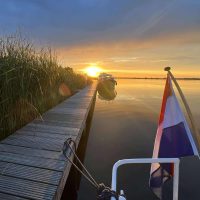