You might not think it, but we are talking about the second largest country on our earth: Canada. The total area amounts to an astonishing number of almost 10 million square kilometers. Only Russia is larger than both Anglophone and French-speaking Canada. The head of state is still Queen Elizabeth II and Canada is still a country full of surprising nature, and with a very long history. The first inhabitants, the Inuit and Native Americans, lived here thousands of years ago.

The best-known cities in Canada are undoubtedly the pleasant metropolises of Vancouver, Montreal and Toronto. Canada's capital is perhaps more unknown: Ottawa. We know some cities mainly because of the skating sport, such as Calgary. Canadian cities are known for their European atmosphere. Canada consists of ten provinces in total. The United States borders the country to the south, to the east, west and north are the Atlantic Ocean, the Pacific Ocean and the Arctic Ocean. Canada is not a country for sunbathers and beach buffs. But that it is only freezing and freezing here is perhaps a bit of an exaggeration.

Canada has been bilingual for 17.000 years. In the seventeenth century, both the French and the English occupied the east of the country. French is especially spoken in the provinces of Québec and neighboring New Brunswick, in the rest of the country English is the official language. An estimated XNUMX Eskimos or Inuit, as they prefer to call themselves, live in the North West Territories and Yukon. More info on the official website of the tourist office: Canada Tourism

In 1993, the Canadian government decided to assign the Inuit their own province. From 1999, the country has a new province, called Nunavut, freely translated 'Our country'. Nunavut gets a seat in the House of Commons.

Traveling through Canada you will fall from one surprise to the next. Nature can go in all directions here. Glaciers, snow plains, National Parks such as Yoho, Kootenay and Okanagan Valley, Rocky Mountains, huge lakes, prairies and many islands: rent a car or travel by bus through this country and you will have a unique travel experience richer!

During our trip through Canada, in addition to the many national parks, we also occasionally visit a large city. For example, we previously visited Calgary, a modern city in the province of Alberta. We were previously...

From Jasper to Vancouver – Leaping Salmon and Waterfalls | Roadtrip Canada (46)

In Canada we are spoiled with beautiful cities and intense nature. The hip city of Calgary and the immensely popular mountains and lakes in Banff and Jasper National Parks were truly bucket list worthy...

After Banff – and a short detour for Glacier – and Yoho National Park, we ended up in Jasper National Park, Canada's second most popular national park. As well as Banff it is a beautiful area...

It was two beautiful months in Canada. Unfortunately it is already time to leave the country, because we will have to be back in San Francisco at the beginning of October. We are going to travel with my parents for three weeks and together the... 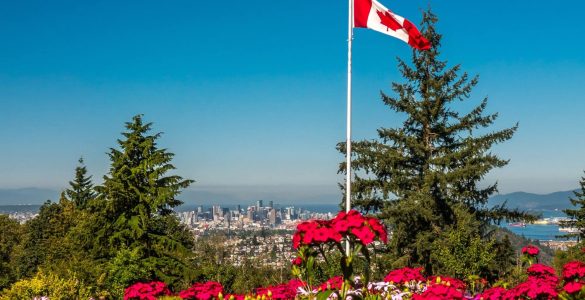 Tips for Vancouver | Complete travel guide – by a local (!)

Because I've lived in Vancouver for a while, I've had many opportunities to discover this beautiful area and believe it or not, I sometimes come across places that I've never been to. I like photography as well as...

After we checked off a few easy hikes in Yoho National Park and enjoyed the beautiful lakes and waterfalls, it was high time to challenge ourselves a bit. We decided to go to Glacier National...

Taking bears and other wildlife into account (tips) | Roadtrip Canada (42)

During our roadtrip through America and Canada we often had the chance (and still do) to come into contact with bears and other wildlife. That can be dangerous for humans and animals. As a tourist you will be charged...

Yoho National Park is often overshadowed by its big brothers Banff to the east and Jasper to the north of the park. Still, like its brothers, Yoho has beautiful lakes, rivers, and waterfalls. Reason for us to... TRAVEL NEWS – August 24, 2022: The suggested tip on ATMs and receipts in America and Canada continues to rise. Not only are the requested percentages much higher, tips are also being used in more and more places...

Do you know that feeling? That the description of something beautiful that you have seen while traveling cannot be explained in words? We sometimes have to pinch ourselves and reflect on what we've been up to lately.