Who dares to drive more than 3.000 kilometers on a scooter through East Africa? Visiting mountain gorillas? Scooter safaris (does this word exist?) in five National parks† To admire lions, buffaloes, hippos and elephants up close, among other things. My name is Eric and I like to travel around on a scooter. Read here part 9 of the unique report of an amazing scooter adventure Uganda, Rwanda en Kenya† In the tenth part of this journey I drive from Muhorro to Hoima, a drive of about 100 kilometers.

The Chinese have arrived…

I am slowly beginning to understand the infrastructure of Uganda. The further away from Kampala, the greater the chance that the roads will be dredged. 'Are you from Fort Portal? Then you've seen those roadworks. Within a few years, the road to Hoima should be completely paved. You now see Chinese people everywhere on road construction projects. You will definitely see them again in the direction of Hoima,' says the receptionist at the Highway Standard Hotel & Lodge.

Then I'm going for the wind. More than thirty kilometers with a lovely sun. The road dries really fast. Around twelve I have to anchor for a herd of Ankole cows. Reverently I wait on the roadside until these champs have passed me. I really can't wait for a stallion from one of those horns.

The first Chinese appear on my path around one o'clock. Under their supervision, Ugandan road workers are busy with bulldozers and other large guns.

At a school, a remarkable sign catches my eye. 'Be a good time manager.' Today that seems to work quite well. I am well ahead of schedule. That was different the day before. Then I left too late and ended up like a drowned cat in the pitch dark in the hamlet of Muhorro.

The euphoria about my prosperous trip quickly ebbs away. caramba. So it could be much worse. It is three o'clock and what I see before me makes me fear the worst. Still 25 kilometers to go… This is the better puddle work. Usually you can just slip past it. This is not possible with these puddles. How do you go through that on a scooter?

I pay very close attention to where the cars drive through. How deep do they sink? Then I walk to the end and put my luggage there. And then with reasonable speed through it. It works but takes a lot of time.

How many signs have I come across along the road with the word 'Development' on them? Whether it concerns a project of an aid organization or the government, the construction of a road or a campaign against or for something for which a foreign organization donates money. Development is the magic word. They are developing well in Uganda (and in the rest of East Africa as well). Often the texts on the signs are barely legible. Not infrequently because the money has run out, the projects have quietly disappeared and nobody felt like getting the signs. Development…

There is another project board in the no man's land 20 km from Hoima. However, this time there is something more going on. The 'Sustainable Development Project' concerns the asphalting of the road from Kyenjojo to KabAoya. The Ugandan government and the World Bank provide financing. The contractor is the Chinese Shengli Engineering Construction (Group) or Shengli Oilfield. What are the Chinese doing here? Oh yes Shengli is part of the Chinese petroleum giant Sinopec.

And what does chance want? Huge oil discoveries have been made in Hoima's turn. To be more precise in and around Lake Albert and the Murchison Falls National Park. It is said to be one of the most beautiful parks in Africa. Precisely there is a lot of oil in the ground. And before you win the oil, you need a good road… Or am I too suspicious?

About oil and an ancient kingdom

Oil is our pride. That is the fairly new motto of Hoima. In the 2000s, huge oil reserves were found in nearby Lake Albert. Since then, Hoima has been experiencing rapid growth. The population doubled to more than 100.000. And as I have personally experienced, the infrastructure is being prepared to facilitate the expected oil boom.

Hoima is also the capital of the kingdom of Bunyoro. Bunyoro is one of the oldest kingdoms in Africa. In the 13e to the 19e century, the kingdom celebrated its heyday and also included parts of Congo, Tanzania, Kenya and Rwanda.

An evening in Hoima is more than enough. There is hardly anything to do for tourists. For me, Hoima is just a necessary stop on the way to Murchison Falls National Park.

Much more on that in the next section.

What is it like to drive more than 10.000 kilometers in Madagascar on a locally bought scooter? Or on a pikipiki (scooter in Swahili) through East Africa? In more than 20 years I have visited more than 100 countries. This has resulted in a lot of priceless travel experiences, which I would like to share with you. 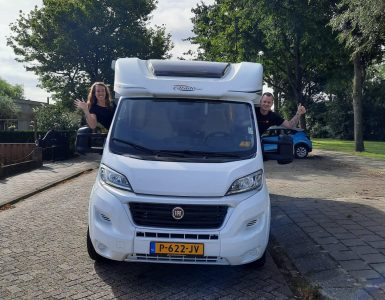