Tips for a city trip to Rome | Good food, sights and hotels

Rome holds a special place in my heart for me. I myself have visited more than 35 countries. Italy is and will always be number 1 for me! Secretly I am a fan of bella Italia!
I have been to Rome 8 times already and Rome feels like R(h)ome and is therefore in my top 5 of my favorite cities. In this blog I will take you why Rome is one of my favorite cities and I also give you tips for the ultimate city ​​trip.

Reason for a visit to Rome was for us, because I was always curious about Italy. I thought it would be good to start with the capital Rome first, starting a holiday with a city trip seemed like something to us. At the time, we didn't have a lot of experience with booking travel and decided to book a total package (flight + hotel) through D-reizen. This cost us about 7 euros for 700 days. Now that I have more experience with traveling (and my friends also call me the ticketmaster) I know that this can be done much cheaper. You can easily fly with KLM, Ryanair or Transavia to Rome. The first time we flew with KLM to Rome, I found the best deal via Skyscanner.

Also read: Skyscanner | How to save (a lot of) money on flights

The following 7 times I flew with Ryanair (departure from Eindhoven airport). I also found these deals through Skyscanner† You can get a one-way ticket from (don't be scared) 9,99 euros! Who can say no to that? Once you have arrived at the airport in Rome you can take the bus to Rome Termini (the central station). A ticket costs about 6 euros one way and you can buy the ticket outside the airport.

2. Lost your way in Rome

It is a fact. I'm super bad with Google Maps. So what should you do during a city trip in Rome…? When I travel, I always take a travel booklet with me. This time I brought an Italian booklet with useful Italian phrases, which allowed me to communicate with the locals. Suddenly I asked an Italian where the Trevi Fountain was. Turns out he was from Naples.

Fun fact: Neapolitans find it very difficult to understand Italian. They speak dialect! They also say you have Italians and you have Neapolitans. So the Neapolitan Antonio did not understand me well and asked his friends what I meant. With hands and feet they tried to show us where the Trevi Fountain was. It was not clear to us. With the Italians it's all about having fun, so we all ended up half an hour late at the local pizzeria to eat delicious pizza and to communicate with hands and feet again.

3. Learning the language of love

Because during my first visit to Rome I communicated with Italians in Italian using my booklet, I was triggered. I think the Italian language sounds beautiful and when I finished my HBO law degree I thought: I want to learn Italian and I want to go back to R(h)ome. Through the internet I found Dilit International House. I booked a course and apartment through the school and took the plane to Rome. You could also book a taxi that would take you from the airport to the apartment. 70 euros was really too much for me, since it is only 6 euros from the airport to the center by bus.

I thought I'd like the apartment itself…but oops, I forgot that I was super bad with Google Maps. From the central station, taking the metro to the right stop just worked, but once arrived at the station I didn't know in which direction to walk. Google Maps indicated it was a 5 minute walk. Believe it or not after 2,5 hours of walking and searching (sweaty and already with suitcase) I had reached the apartment! Pfieew well saved 70 euros!

Well, what is there not to see in Rome? I've been to Rome 8 times and I've never, ever been bored. This city has so much to offer. Are you looking for tasty eateries? Rome has it. Culture? Rome has it too. Rome has everything for a perfect city trip! The great thing about Rome, despite it being a mega city, is that it is so compact. You can literally do everything on foot. The Trevi Fountain is spectacular, but the Spanish Steps is also a must see and was a must sit at the time! But unfortunately it is no longer allowed to sit on the Spanish Steps (sin). The reason for this is because the Spanish Steps are considered museums.

Golden tip: visit Vatican City. Easy to reach by metro and on Sundays the Pope sometimes wants to wave out of his window! Say hi to the pope!

Rome is amazing, magnificent and really indescribable in a few words.
You have to see it, you have to experience it. Many tourists come to Rome every year.

Tip: Where there are tourists, there are also pickpockets. Of course it can happen to anyone that you get robbed (let's hope it doesn't happen, knock on the door). Prevention is always better than cure and therefore hide your wallet in a good place.

Going out in a city such as Rome during a city trip suddenly gives you a completely different experience of a city. When I think of going out, I think more of clubs and discotheques. Italians think otherwise. The Italians in Rome usually go out in the Trastevere district. This is also the nicest working-class district of Rome. Friends gather here and anyone can join.

Are you looking for something more luxurious and a place where you can dance? Shari Vari it is! This club is in the heart of Rome and is trendy. You will not get bored here easily. If you want to get more into the chill atmosphere, I recommend you Pharmacy Cocktail bar at. Not really a fan of alcohol? Don't worry, they also have delicious alcohol-free cocktails here.

Have you seen the movie Enrico Piaggio Vespa on Netflix? If the answer is no, then I advise you to watch this inspiring film. Enrico Piaggio is the inventor of the Vespa. People in Rome mainly go from A to B by Vespa. We thought ... why not rent a Vespa during our city trip in Rome and explore Rome on a Vespa? So we went to a landlord. There are plenty of them in Rome. The man asked us if we had experience riding a scooter.

Well, no was the answer. Driving a car and cycling was no problem for us, but we had never ridden a scooter before. The man indicated that it was better for us to rent a bicycle. A week earlier, Dutch tourists had also rented scooters and had an accident. The insurance did not reimburse anything, which left the tourists with a hefty amount in their stomachs. Oops, we didn't want that, so we went to explore Rome by bike! A deposit of 100 euros was required and just when we wanted to return the bike my bike was acting very strange. Fortunately, the man said it was no problem and because of this I was not 100 euros lighter.

During your city trip in Rome it is good to know that the hotels in Rome are (unfortunately) dated. I've stayed in a 3 star and a 4 star hotel, but you can't compare it with a 3 or 4 star hotel in the Netherlands. The location is very important to me. I therefore recommend a hotel near Termini station. Termini is a large central station.

Note: it is not very pleasant to walk around this station in the evening/night. Pay close attention to your belongings.

Pizza, Pasta, Gelato aka delicious Italian ice cream everywhere! Mama mia! During city trips I like to eat where the locals eat, so do in Rome! My tip is therefore go to the working-class district Trastevere!

You know the food is good at a restaurant when there are a lot of people and when the locals are there. That's at ristorante Carlo Mint the case. You eat really cheap here. Good to know is that you often have to pay coperta in Italy. Depending on the restaurant, this is usually 1 or 2 euros per person. Order at least the Pizza Margherita at Carlo Menta and the Tiramisu to finish.

Looking for something a little more luxurious? 'Gusto have it all! Service and food is here perfect!

9. Take the FlixBus to Naples

Seen everything during your city trip in Rome and do you also want to explore another city? Then book a ticket with the FlixBus to Naples. This bus is environmentally friendly and takes you to Naples within 2,5 hours. This city is completely different from Rome and that is why it is nice to combine both cities.

You can also explore other cities from Rome, take a look at bookaway.com† Bookaway has numerous bus, taxi and minivan offers throughout Italy.

Eat the best pizza in Naples at L'Antica Pizzeria da Michele† This restaurant is known for the movie Eat, Pray & Love† In addition to delicious food, Naples is also known for Maradona.

Tip: those who have seen the series Gomorrah on Netflix may have a little fear of going to Naples. It's amazing how dangerous it is there.

That's it! These were the tips for a nice city trip to Rome. Lots of fun!

I love discovering new places, new people and new cultures. Recently I traveled through South East Asia for four months. That was really spectacular! When will you get another chance like this? Sometimes you have to create opportunities yourself. I see travel more as an investment. So invest in yourself and explore!

What to do in Majorca? † Ins and outs about the island of Mallorca

Hello como estas? España, aka Spain is great. Did you know that Spain's ancient name used to be Hispania? Madrid, Malaga & Seville are the ideal cities for a city trip. But Spain has more to offer than…

Berlin, Berlin, Berlin. Germany has great cities and you can eat very well there! I've been to quite a few cities in Germany. City trips in Munich, Frankfurt, Dresden you name it. Berlin... Where to stay in Naples | 4 great accommodations

When you go on holiday to Italy you have many options to stay overnight. Want some luxury accommodations in Naples? Then you choose a hotel. Are you a solo traveler and do you want to chat socially with other… 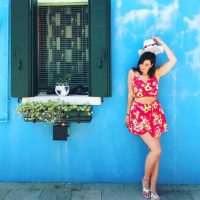