The Orange Backpack's 5 favorite museums in the Netherlands

The Netherlands is known for its diversity of museums. From historical to modern art, you'll find it all in The Netherlands† We love art, history and museums and have visited dozens of gems all over the country with our Museum Card. In this blog we share our favorite museums with you. Enjoy the beautiful art treasures on display here!

1. Museum Voorlinden near The Hague

Museum Voorlinden in Wassenaar is our favorite museum in the Netherlands. The museum has a beautiful collection of modern art, including work by Richard Serra, Ron Mueck and Damien Hirst, among others.

Museum Voorlinden is located in a beautiful wooded area near Wassenaar. When we visit the museum, we take the train to The Hague and take a public transport bicycle there to cycle through the woods to Voorlinden. A museum visit is not only about the art between the four walls of the museum, but also about the estate on which the museum is located. Be sure to walk over it on a nice day. Along the way you will also pass beautiful sculptures in the garden.

The museum is known for its experiential art. Special works in Museum Voorlinden include the installation The Pool by Leandro Erlich and the steel maze Open Ended. There is a permanent collection with, for example, these works, but changing exhibitions are also organized so that you keep coming back to this great museum.

Incidentally, Voorlinden is one of the few museums that cannot be visited with a Museum Annual Card.

2. The Kröller-Muller Museum on the Veluwe

The Kröller-Müller Museum is located in the forest on the Veluwe and is one of the most famous museums for modern art in the Netherlands. The museum houses an extensive collection of paintings by Vincent van Gogh, including the famous painting The Potato Eaters.

Other well-known artists represented in the museum are Claude Monet, Piet Mondrian and Auguste Rodin. In addition to modern painting, the museum also has an extensive sculpture garden.

But what makes the museum one of our favorites is its special location in nature. It is located in the middle of one of the most famous nature parks in the Netherlands. You can get there by car, but it's even more fun to park it at the edge of the park and take a free white bicycle to explore nature on the way to the museum.

Would you like to explore more of the Veluwe and make it a weekend away? So did we and we slept in one of these special tiny houses on the Veluwe!

De Haar Castle is one of the largest castles in the Netherlands and therefore the most visited. The origins of the castle go back to the Middle Ages and it has now been in the hands of the special Van Zuylen family for many centuries. For decades, the family only used the castle in September, when they organized large parties. Celebrities such as Brigitte Bardot and Yves Saint Laurent followed.

Also read: City trip Netherlands – The nicest places in our own country

During your visit to the castle you will explore several period rooms, where you will go back in time. It's like the family could walk right in. The highlight is the central hall, designed by the architect Cuypers, who you may know as the designer of the Rijksmuseum and Central Station in Amsterdam. But don't forget to take a walk through the gardens after your castle visit. You will find ponds, deer and beautiful views of the castle.

Museum Naturalis is the largest museum of natural history in the Netherlands. The museum is located in Leiden and is known for its extensive collection of fossils, minerals and animal models. Those fossils in particular make Naturalis one of our favorite museums in the country!

Because did you know that you can admire enormous dinosaur skeletons in the Naturalis? The dinosaur room is 12 meters high, so that the dinosaurs come into their own. Dinosaurus Trix is ​​one of the museum's latest acquisitions. In 2013, this fossil was unearthed in Montana in the United States. It is one of the most complete and best-preserved skeletons of the T-Rex in the world. The excavation lasted no less than two years and this masterpiece has been in Naturalis since 2016, where you can admire it.

Naturalis is also a very child-friendly museum. Even if kids find the dinosaurs a bit too scary, there are still plenty of rooms with beautiful animal models, facts about nature and fun interactive games.

Also read: World trip in our own country: discover these green places in the Netherlands

5. The Rijksmuseum in Amsterdam

The Rijksmuseum in Amsterdam is perhaps the most famous museum in the Netherlands. The museum houses a huge collection of paintings, drawings, sculptures and furniture by famous artists such as Rembrandt, Vermeer, Frans Hals and Jan Steen.

The museum is overrun by tourists from all over the world, but Dutch people should also visit this museum once in their lives to admire their most famous art. The Night Watch is of course the most famous work. This masterpiece by Rembrandt hangs in the Hall of Fame, where you can also find most of the other masterpieces.

A visit to the Rijksmuseum is not only fun for art lovers, but also if you want to see that special building for yourself. The striking building of the Rijksmuseum was designed by architect Pierre Cuypers. He was a Dutch architect known for his neo-Gothic buildings. The Rijksmuseum is his best-known design, although it was very controversial at the time it was built. Cuypers was known as a designer of Catholic churches and the museum building also has something ecclesiastical. And that at a time when the Netherlands was Protestant. The Protestant king refused to open the museum.

This guest blog is written by Maartje and Sebastiaan from TheOrangeBackpack.nl. They have been travel buddies since their tenth date to Cambodia, have made traveling their job and now travel around with their travel baby and self-built camper van.

4 reasons to fall in love with Montenegro

During our current winter trip, we had Albania and Greece in mind as destinations, but it ended up taking us a month to get to Albania. We fell in love with Montenegro! This beautiful...

Do you want to extend the sunny summer feeling? Are you not ready for the colder days and wet autumn yet? Then autumn is the perfect time to plan a trip and you don't even have to go very far...

For those who love the holidays and are still looking for a destination for a nice holiday in November or December, we have the perfect winter tip. Go to French Alsace! This region is open all year round... 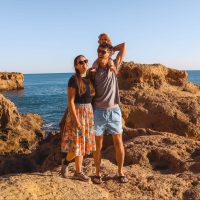