Our New Itinerary and Itinerary for America: An Update | Roadtrip USA (21)

It will be many of you on Facebook must have noticed that we are now in Colorado, while in our opinion we initial itinerary would actually first travel to the north (including Chicago and Wisconsin) and only then to the west. In this article I will explain why we changed the travel plan for America, what we saw and did en route from Florida to Colorado and what the new travel plan is.

Why change the itinerary?

That has several reasons. It's a bit of a coincidence. Distances, costs, our mental health, but also the weather influenced this choice.

First of all, on closer inspection, we just want to make fewer kilometers. The distances here are huge and while I can enjoy driving our 4×4 camper, it's not something I want to do every day. I really enjoy driving on country roads and mountain routes, but I find highways boring and boring with all that truck traffic. The many kilometers we were going to make to the north would mainly be highways, so I honestly miss them like a toothache.

Then there's the cost. The high fuel prices hit our travel plan hard in the wallet. Last year, when I started planning this trip, I calculated that I would have to spend about 7.000 to 8.000 euros on fuel (diesel). The harsh reality, however, is that diesel prices in America have increased by 100% in one year.

You read that right indeed, one hundred percent† By way of comparison: in the Netherlands, fuel prices have risen by roughly 40% in the past year. Although the fuel in America is still slightly cheaper compared to the Netherlands, it is not much more. It fits in nicely though. Precisely because we planned to do so many miles.

The 8.000 euros that we had previously budgeted for diesel has doubled to 16.000 euros with the current fuel prices. And the end of the increases is far from in sight.

You don't have to be a mathematician to understand that this causes a big dent in the budget. Added to this is the bad euro-dollar ratio due to the war in Ukraine and the fierce inflation that is gnawing at our budget on all sides.

We had a period where we felt we had to hurry to stay on track. This was stressful! That is of course absolutely not the intention with a trip like this. If it's somewhere nice to be, we just want to be able to stay a few days longer. I had mapped out the ultimate route through America, with as many places and sights as possible, so that it would also be easy to take out or skip parts… At least then we could choose. Fortunately, in that sense, flexibility was part of the plan.

The new plan: across rural America

Making fewer kilometers and taking it easy. After we waved goodbye to our family in Miami enjoyed Malou and I at Lake Rousseau en Manatee Springs State Park in Florida for a while of the beautiful nature. These were the places where we could look at the plan in peace and re-evaluate.

We stayed for two nights at this beautiful lake where we were treated to intensely beautiful sunrises. I enjoyed the peace here so much that I started to think about our route and that the schedule is quite full.

We took the plunge at Manatee Springs, after two wonderful nights and a beautiful hike through nature full of animals. We are going to change our travel plan permanently. We're going to take it easy and drive fewer miles.

We came to the conclusion that we didn't want to drive to the North-East at all (to Chicago, among others). Way too many miles! So we decided to head straight west to Louisiana and Texas. From Texas we would then drive up through New Mexico to Colorado.

What also played a part is that we saved so many beautiful places that we wanted to see in New Mexico and Colorado. So much so, that we already knew that the 'last leg' of our journey would be a busy one. We could now take that pressure off a bit.

Carving away from the north-east of America gave us the chance to visit some of these places now, before the summer. We will do the other part after the summer. At least, that's how we thought of it.

We had been on the road for well over a week, when it got extremely hot in Alabama and Louisiana. Mid-May already! And then came another massive heat wave in Texas. In mid-May, temperatures of 40+ degrees were already indicated here. So we didn't feel like doing that at all, because then you can't do anything anymore. You can then forget about walking or hiking and exploring cities in that heat is no fun either.

New plan due to extreme heat

So, just before Louisiana, we decided to rigorously change the plan again. We drove a bit to the north to cool off and then to the west. Knowing that we had to go through Kansas, where there is really nothing to see. We took this for granted…

Our Google Timeline map below clearly shows that we suddenly bend upwards and go straight through Kansas.

Across Alabama, Mississippi and Arkansas

Fortunately, the first part of this route was not a punishment either. We drove at a reasonable pace across the state of Alabama, Mississippi and Arkansas. We found some beautiful viewpoints there, like this one South Mountain Scenic Overlook.

We also visited some state forests and lakes there and stood at various beautiful camping spots close to the water. After that heat we really needed some cooling. The first place we landed was Tyler Bend Campground to the buffalo national river† A fantastic piece of nature where we also walked a lot.

After this we drove further north in Arkansas, into the mountains. The next stop was Beaver Dam Site Park, where we spent three nights on the Dam Site Lake Campground to work on the overdue maintenance of the website.

We had good weather here for one day until it suddenly turned. We saw only rain, rain and more rain for two days after that.

We made a lot of progress in these days working on the website, but we hardly got out. The weather was really awful. After two days of hard work, we decided to treat ourselves to an old-fashioned German Schnitzel and German beer at a local (German!) restaurant called The Bavarian Inn.

Due to the persistent bad weather, our solar panels stop tracking our power consumption the next day. Everything was empty! The pantry, the refrigerator, the power station and the household batteries that we still have as backup.

3-in-1 battery, inverter and charge controller 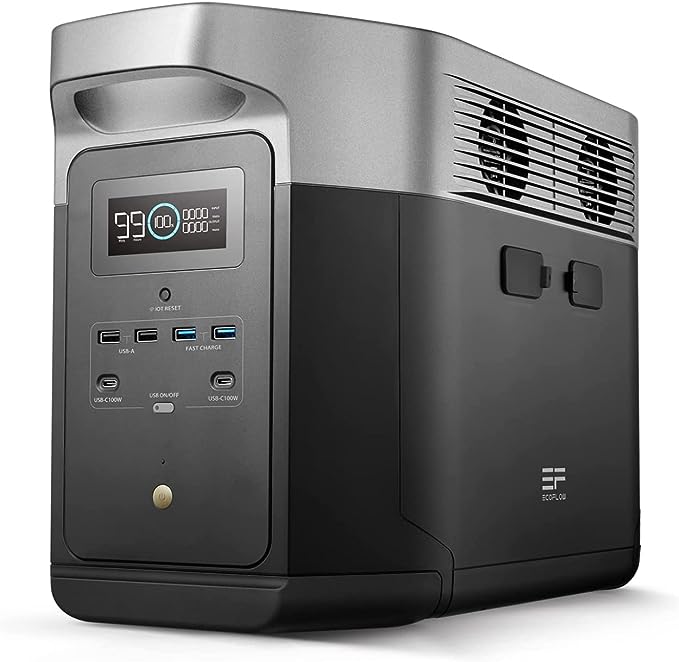 The EcoFlow Delta MAX is a portable Lithium-ion power station with a capacity of no less than 2016wh. This device makes inverters and charge controllers for solar panels superfluous.

The capacity is expandable and with 4 x 2400W (4600W peak) AC outputs, numerous 12v and USB connections, it is suitable for many applications both indoors and outdoors.

We have installed this device in our motorhome and it's really fantastic to have so much power at your disposal† We grill, cook, cool almost everything electrically now.

Pros:
Cons:
Order Now
Want to support us? We earn a small commission if you make a purchase through our link(s), at no additional cost to you.

So there was nothing for it but to leave. Then we could first do some shopping and then recharge the batteries and power station while driving. We have connected them to both the solar panels and the dynamo.

The hellish ride through Kansas

After shopping, we first drove a short distance through Missouri and then made the crossing through Kansas to Colorado. What a hellish ride this was! We were perhaps the most boring two days of my life. There was really nothing to see but countryside, cows, abandoned villages and old factories. The weather didn't help either; lots of rain and wind.

Even though I almost fell asleep at the wheel (Malou always fell asleep next to me), after 1000 kilometers of countryside we were still treated to a beautiful sunset and welcomed by a herd of cows along the road. The colors in the sky were beautiful!

And because we were in a very remote place, I think 150 kilometers from the nearest village or gas station, it suddenly felt really cool. What a bizarre country this is.

After the miserable long drive through Kansas, just straight ahead, after two days of driving, the redemption finally came: the Welcome to Colorado sign was in sight! How thrilled we were to see this sign after that hellish ride through the godforsaken landscape called Kansas.

We stopped here for a few hours to rest and escape the wind for a while. It was not pleasant driving with a side wind of +-45 kilometers per hour.

Now that we've put in quite a few miles in a relatively short period of time, we really want to make the most of it in Colorado. We visit here, among other things, the national park The Great Sand Dunes where we go sandboarding. We also visit Mesa Verde National Park, where we learn a lot about the indigenous tribes that lived here more than 1000 years ago.

Then we drive on one of the most beautiful roads in the world – the Million Dollar Highway – to mining towns Silverton en Ouray† Here we camp by the river at almost 3000 meters and hike to intense blue glacial lakes at almost 4000 meters.

Heavy rainfall has washed away roads and bridges in recent days and the park is completely closed. It remains to be seen how this develops in the coming weeks.

More on that later!

Owner or Wereldreizigers.nl | Discover the world!

Stubborn & decisive world traveller
– Life is short, make the most out of it in literal sense.
– Never take no for an answer.
– If you think about it, DO IT!

What is the best camera for a world tour? And why?

Anyone who travels far or around the world will probably pack his or her suitcase, camper van, camper or backpack with clothing, but of course also all kinds of handy (often electronic) gadgets. An important...

This 'travel blog bible' with 100 tips is intended for both starting and advanced travel blogs. For example, do you like to travel and share your experiences with family, friends and followers on, for example, Polarsteps...

Do you have a travel-loving friend or family member who likes nothing more than traveling the world? Or are you someone who likes to buy quality stuff? Then here are some luxury (and mostly ecological...