Home » Oceania » Australië » Thom and Lianne: 'We are living our dream in Australia'

Thom and Lianne: 'We are living our dream in Australia'

We are Thom (29) and Lianne (27) and we met at the beginning of 2019 in Australië† We both stopped everything in The Netherlands for an adventure in 'Down Under'. We became friends over a barbecue on Bondi Beach, arguably Australia's most famous beach. A year and a half later we live about twenty meters from the beach in Manly, a coastal village near Manly. Here we work, live, surf, snorkel and live with a lot of fun. You'll just step out the door and watch the whales jump into the sea. Well, this is what our life looks like.

Also read: The Wild West of Western Australia | An alternative round trip route!

During our first conversation we found out that we live only ten kilometers apart in the Netherlands. Thom comes from the farming village of Schipluiden and Lianne from Schiedam, near Rotterdam. We clicked immediately and we especially noticed that we were reasonably on the same page in terms of humor and statements.

Working on a farm in Australia

Lianne just wanted to stay another year in Australia. And if you're on a work visa, you have to work on a farm for three months if you want to stay another year. Thom got carried away and that's how we ended up at some cucumber farmer somewhere around May 2019.

During this entire cucumber period we were together 24/7, which showed that we might have liked each other more than we thought. And yes, even Lianne. After the end of our farm work we went on holiday to Hawaii, where it all finally happened. Under a waterfall, after an unbelievably long walk, Thom had finally gathered the courage to ask Lianne if she might want to be his wife. Thank goodness she said yes. Every time we write or talk about this moment it starts to itch on all sides, because we secretly think it's just a nice story.

From Perth to Sydney in a campervan

After this period we traveled through Indonesia for about a month and a half and lived in Western Australia for half a year. Until we both lost our jobs at the beginning of this year due to corona. Fortunately, Thom was able to return to an old job in Sydney, after which we drove from Perth to Sydney in ten days in a campervan. And this is not even a short ride. This is a journey of about 5000 kilometers. A pretty cool and intense adventure, if we do say so ourselves.

Now we live in Manly, within walking distance of a beautiful beach with very nice waves for surfing and a beautiful bay for snorkeling. Here we occasionally see whales jumping, sharks swimming and dolphins playing in the waves. We also regularly surf and walk through the beautiful nature. We both have jobs here, where we can easily live and save for new adventures.

We also have our own Instagram page last January @whatifwefly_ and web site, www.whatifwefly.nl, started. If you would like to follow us through the channels, that is of course very nice. We're going to get you here Wereldreizigers.nl also provided with the necessary updates, so we will undoubtedly meet again soon! 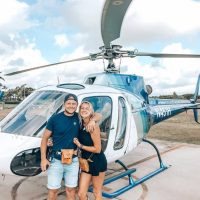