Traveling with VW T3 bus camper (1) | From dream to reality

"The only good way is if you learn how to do it yourself, that's how I started" were his words. After this I drove home with a double feeling and storm in my head. The words of this seasoned Volkswagen T3 enthusiast are still going through my head more than two years later. He was right.

In this article I will take you through our story, how we got from our dream (overlanding with a Volkswagen T3 bus camper), have made it a reality.

The love for Volkswagen vans

More than four years ago, the love for Volkswagen vans, especially the T3, started with Dieke and me. After graduating, Dieke as an (ambulance) nurse and I as an occupational therapist, we wanted to make a journey before working life would push us into a rut.

All options have been passed, from B&Bs to a tent, an old Volvo with a mattress in the back to finally a camper van. The golden tip came from a good friend who sold his motorhome for a profit after the holiday. He was handy, had repaired the camper himself and thus saved costs. We should be able to do that too, right?

The search began and we eventually fell in love with an old rusty bus that was allowed to bear the name Karel. And I mean really rusty! The sliding door rail had become a big hole, as well as the entry at the front and the sheet metal at the back. We were young and brash, enthusiastic naive students. I won't go into more detail, but if I had been given the wise advice I received two years later, it probably would have saved me a lot of money. Or maybe not, something with perfectionist tendencies.

In short, Karel was allowed to receive a new interior with us once in his life, to the welder twice and to undergo a new engine change three times. But most importantly, he was allowed to travel with us three times Europe. He also invited us to the nicest campsites in the first summer of the pandemic The Netherlands charged.

It's a virus, those Volkswagen vans

So where does this predilection for such a moving money pit come from? The feeling of freedom? Hypnotic hum of the old diesel that prevents you from having any conversation? Or the holiday feeling that you capture from the moment you get in, even if you drive up and down to the supermarket? Maybe it's the happy faces of passers-by and the waving hands of other Volkswagen T3 owners as they pass. Say it. It's a virus…

We're going on a world trip one more time

Dieke's parents passed away in 2019 and 2020. Dieke wanted to get away, away from home, away from work, not to mourn but away from everything. It was flight behavior that I didn't want to give in right away. However, this was the moment when we plan for a world trip, our greatest adventure yet, saw the light of day.

“The Stans”, or South America?

I wanted to go to “the stans” as they say very coolly. Towards Mongolia through Kazakhstan, Turkmenistan and all the countries I actually know nothing about. Dieke doesn't like desert she says, she wants to go to South America. The famous statement “Happy wife, happy life” was allowed to prevail and option two has become it. Can I report now, two years later.

The search had to start again for a suitable vehicle. The sensible choice for overlanding is a Toyota Landcruiser or a Hilux most say. I can now confirm that. After much deliberation, however, we went again for a Volkswagen T3, a persistent virus, we had not yet learned our lesson.

Not just any T3 this time, my childhood dream came true and we found a Volkswagen T3 Syncro with a high-lifting roof. For those not in the know, a Syncro is that cute square Volkswagen van equipped with one of the best 4×4 drives of its time. He may bear the name Charlemagne. The same bus as Karel, only higher on the wheels, a higher roof, 4×4, a world conqueror! So the Great. Named after the emperor of the Roman Empire and conqueror of large territory. Just like our Charles.

Also read: Want to buy an off-road 4×4 overland expedition camper? † Tips and what to watch out for

A growth spurt, Rob the great

So after the purchase I ended up with the seasoned T3 enthusiast, who gave me the wise advice to do everything myself. I was not afraid of the interior, I had also built that at Karel's. I couldn't weld, that's a profession in its own right. I have been a bicycle repairman for years and spent my school years at the free school. I dare to call myself creative and handy, but this would be a completely new challenge. And I took up that challenge. An afternoon of 'crash welding course' with the same good friend who had sold his motorhome for a profit and the restoration project, which was allowed to take a total of 1,5 years, has started.

All this took place during the period when Covid-19 left its big fat mark on our social lives. An ideal time to spend my weekends and holidays in a barn in Brabant, far from home. While I thought I was a mechanic, Dieke worked long days at the Radboud Hospital to quell the prevailing pandemic.

Everything has two functions

Many books have been devoted to what exactly is involved in converting an (old) Volkswagen bus into a camper. Each in his own way. Our motto is that everything should have at least two functions. You have to if you want to live completely independently in a bus of 1,5 x 3 meters interior space and a headroom that is just not sufficient for my 1,87 meters.

Cooking, eating, sleeping, sitting, pooping, lounging, arguing, then sleeping separately (hopefully not necessary). As cliché as it is, I believe the people who say that anything is possible if you want it hard enough. Charlemagne is living proof of this.

Also read: How to: Buy or convert a campervan

And here I am, sitting at a table in a restaurant somewhere Guatemala while the water pours down from heaven. It is the rainy season, we had not taken that into account. Dieke dangles from the ceiling in a kind of sitting hammock while she reads a book from the local bookcase.

Also read: Shipping an Overlander vehicle, motorhome or motorhome bus | How much does that cost?

Yesterday we celebrated that we are 100 days on the road, we are making our dream come true. Karel is standing at the bottom of the lake. It's muddy and slippery and the way up is steep, but I'm not worried. Karel is a Syncro. He'll come up, I know, because we built him. With the help of others 😉 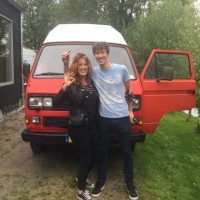