The ultimate camper roadtrip by Romania | Our favorite places

Romania† one of our favorite European Nations. From The Netherlands Romania can be reached by car in approximately 18 to 19 hours. From Schiphol you can be in Bucharest in less than 3 hours. Yet it is an unknown destination for many people. We visited the country in 2019 and last summer with our self-built bus camper and put here the best tips for a roadtrip through Romania for you in a row.

Also read: Traveling through Spain with the camper during the corona crisis | Our experiences

We start our roadtrip by Romania is Maramures. Maramures is the most authentic region of Romania and is known for its traditional wooden houses, the hand working the land and living what the land has to offer. You really shouldn't miss this region, as soon as you drive into the region you imagine yourself 100 years back.

In the middle of Maramures is the village of Breb, where there is a campsite run by Dutch people (Babou Maramures). From this site you can explore the village on foot, take a bike ride through the region past wooden churches dating back to 1300 and climb Mount Gutai (or paraglide as Adriaan has done). Next to the camping site is a restaurant serving locally produced food. Highly recommended!

From Maramures you can roadtrip continue through Romania and continue to the most famous region of the country: Transylvania. The region is known for its castles, dense forests, tourist villages and the brown bears that live there.

Brasov is the largest city in the region. This city is built against a mountain, on which the "hollywood letters" of her proudly adorn. To get a good picture of the city, it is more than worthwhile to climb this mount Tampa. If you don't like it that way, you can also take the cable car up. Brasov is a nice city to wander through and a good base from which to explore the surrounding villages. If you want, you can also go on a bear tour from the city with, for example, the organization Wild Romania.

Well-known villages near Brasov include Rasnov with its fortress, Bran with its castle Dracula (to be honest we liked the outside more than the inside), Sibiu and Sighisoara with its medieval city centers and Buşteni where you can climb the mountain Caraiman. In addition, Brasov is close to the Piatra Craiulu National Park, which with its rock formations can certainly not be missed. roadtrip by Romania. Finally, under Brasov, there is a reservoir near the town of Tesila where you can enjoy a swim and/or picnic on a hot day.

From Brasov we continue our roadtrip through Romania to Central Romania. From Brasov it is about 3 hours drive to the capital of Romania, Bucharest. Romania has few highways, so driving distances often takes longer than you are used to. Most roads (which are of good quality by the way) lead through villages or over mountain passes, so you get to see a lot of the country while driving.

Bucharest is a pleasant Eastern European city bursting with terraces and bars. You will encounter most tourists in the old center (where most of the terraces are located). If you are in town, don't miss the government building, or the old palace of Ceausescu. This building claims to be the largest building in Europe with more than 2000 rooms. The road to it alone is impressive with its immense fountains. We also really enjoyed walking the Calea Victoriei. This street is full of beautiful buildings and gives the feeling of being in Paris for a moment.

Above Bucharest is a wine region, around the town of Tohani. We visited the wine farm La Certa and were given an extensive tour and wine tasting. Well worth an hour's drive north.

(A long way) Above Tohani, near Bucovina, is a region known for its many monasteries, each more beautifully painted than the other. So it's no surprise that some of these are on the UNESCO World Heritage List. The most famous monasteries are Petru Vodă Monastery, Voroneţ Monastery, Humor Monastery, Suceviţa Monastery, Putna Monastery, Moldoviţa Monastery and Bârsana Monastery. It is fair to say that after a number of monasteries we became quite saturated.

Below Bucharest runs the Danube River 2 hours away. Are you really ready for a dive but don't feel like driving to the Black Sea? Then you can visit Plaja Gostinu. That riverside even has a really hip beach bar!

The Black Sea region is a real holiday region and can therefore not be missed during your holiday roadtrip by Romania. It is bursting with motorhomes and caravans along the coast, beachgoers and holiday villages.

The most famous holiday village in Romania is probably Vama Veche. In the middle of the summer holidays we were once again in Lloret de Mar. This place has a vast boulevard along the beach with countless bars, restaurants and night clubs. During the day everyone hangs out on the beach to let loose in the evening. We thought it was fantastic for one evening, especially because the GT's cost less than 3 euros, but had seen it again afterwards.

If you want to visit quieter beaches, we recommend visiting Plaja Agigea, Plaja Corbu and/or Plaja Vadu. These beaches are less known among the "masses" and already have their own charm. Plaja Agigea, for example, has cute bays, plaja Corbu again hip beach bars.

The largest city in the Black Sea region is Constanta. This port city is not immediately known for its charm, but we found it quite nice to be honest. It has a small cozy old center that you can wander through and there are also some small neighborhoods that you suddenly stumble upon when you walk out of the center. After a few hours you are bored, but if you want something other than the beach, it is a nice trip!

Finally, the Black Sea region has a very special area; the Danube Delta. This area is the largest wetland area in Europe and therefore home to many pelicans and flamingos (and hundreds of other bird species). You suddenly find yourself in a completely different world there.

Since there are no roads through the delta, it is best to travel to a town on the outskirts, such as Tulcea or Murighiol, to take an organized boat tour from there. Our campsite offered this one. It is also possible to do kayak tours through the region. Unfortunately we didn't have time for this, but we really thought this was a must. From Tulcea there are also water taxis that can take you through the Delta to the Black Sea and then visit the coastal town of Sulina. Unfortunately we were not able to do this either, but if we come back it will be on our list!

These were our favorite places for a campervan roadtrip by Romania. Until the next blog!

VANDEMICS - Adriaan & Sandra
? From Life in Pandemic Times
? We travel Europe with our little camper from named Fordtress!
1️⃣ One year sabbatical
? Currently in Spain 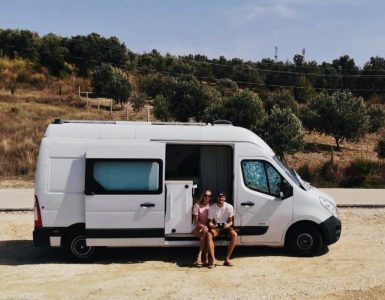 And then it's suddenly over, 12 months of #vanlife just ended. We are back home and it seems like it has all been a dream. Twelve months of freedom wiped out of our minds to make room...

if you think on Bulgaria, many people quickly think of Sunny beach. But this country has a lot more to offer than just sunny beaches and hopping revelers. We made a road trip through Bulgaria with our self-build bus...